A little bit of history

Here at Shepherds Purse, we’ve been using sheep milk to create our award-winning cheeses since the late 1980s, when our Mum, Judy Bell MBE, first began milking sheep and making cheese from sheep milk. She chose sheep milk or (ewe's milk) because of the growing evidence of its rich nutritional profile and health benefits, particularly its potential to help people who had been diagnosed with cow's milk intolerance.

Whilst we may have been milking sheep and making cheese for over 30 years, and our fellow Yorkshire farmers thought we were a "little bit barmy" to start sheep milking in the 1980s, sheep milk has actually been enjoyed by humans for centuries!

Especially in the Mediterranean and Middle East, sheep milk and sheep milk cheeses have been cherished by locals for thousands of years. It was in this region that sheep were first domesticated, as the locals realised sheep milk’s unique health potential.  It’s speculated that Bulgarian Shepherds attribute their long lives in part to the nutritious benefits of sheep milk; and legend has it that ancient Bulgarian warriors survived on a diet of yogurt made from sheep milk, carried in a bag made from lambskin - this combined with their body heat, helped ferment and turn the milk into ready-to-eat, super nutritious yogurt which sustained them and kept them fit for battle!

From lower blood pressure, to stronger bones and glowing skin - read on to discover some fascinating facts and health benefits about this highly nutritious, yet remarkably little-known and less-utilised super food...

Sheep Milk is loaded with vitamins and minerals

Sheep milk is high in nutrients, even when compared to cow or goat milk. These nutrients are fats, proteins, vitamins and minerals, including:

Sheep Milk contains approximately a third more energy than Cow or Goat Milk, coming from the higher proportion of medium chain fatty acids which play a role in effective weight control by promoting satiety (feeling fuller for longer), reducing fat deposits, increasing energy and being more easily metabolised (turned into energy in the body) due to having smaller fat globules compared with Cow or Goat milk.

“Sheep Milk contains just the right ratio of fat, protein and carbohydrates, making it much easier to digest and helps your body absorb all the goodness.”

With around double the amount of fat compared with cow or goat milk, sheep milk is ideal for making yogurt and cheese. However, the high fat content quoted for sheep milk can be off-putting for some people. To counter this, there are a number of things to understand before condemning the milk to be skimmed before it becomes acceptable...

“Within the so-called "fats" are three fat-soluble vitamins (incorporated within the fat) without which you could be very ill if not dead. These are A, D and E. Sheep milk contains considerably more of these three vitamins than even cow or goat milk. The vitamin D load is 0.18 g/100g against summer cow milk at 0.04 g/100g”

Sheep milk contains a rich source of calcium compared with other milks. More specifically, sheep milk contains lacto-calcium, which is a much more easily absorbed than the calcium carbonate found in other milks. The health benefits of a diet rich in calcium are vast, and it’s known to have positive effects on disorders like hypertension, osteoporosis, obesity and dental cavities. Calcium is also needed after any debilitating illness.

Together with lactose and vitamin D (almost twice as much vitamin D as cows milk), the calcium in sheep milk is vital in the fight against Osteoporosis, a scourge in both the UK and USA. Bone density is laid down in adolescence, so it’s vitally important for children going on into their teens to drink milk. Most soft drinks, so popular among the young, actually destroy bone density.

Other important vitamins and minerals in sheep milk include:

sheep milk is Higher in protein than cow or goat milk

This is great news for those who take health and fitness seriously! Studies have found sheep milk proteins have a slightly different structure to bovine (cow) proteins, which means they can decompose by reacting with water (called hydrolysation) faster than those found in cow’s milk. 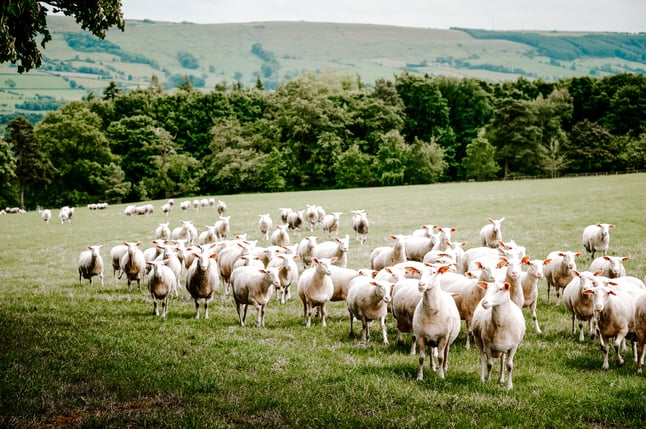 Similarly, the whey proteins are a soluble, easily-digested form of protein found in all milks which does not get incorporated in cheese - instead, it slips out in the whey. Sheep milk is three times higher in this form of protein than cow or goat milk, making the whole milk easier to digest.

Casein proteins are insoluble and also found in sheep milk; but little work has really been done on them in sheep specifically, whereas Lamb is often the most recommended meat for people with intolerance to meat. Now here's the science bit: There are two types of beta-casein protein found naturally occurring in cow milk – A1 and A2. The A1 type is largely attributed to be the cause of common digestive issues in humans, such as lactose intolerance. Interestingly, sheep’s milk (along with human breast milk) contains the A2 type protein which is believed to be more easily digested.

Sheep Milk is good for allergy sufferers and those with intolerances

Allergic reactions can be deadly, and intolerances can make one's life miserable. In the UK alone, milk allergy is one of the most common childhood food allergies, affecting about two to three percent of infants; and one in five people (that’s around 12 million people!) in the UK report struggling with digestive issues after drinking cow milk.

As sheep milk is more readily digestible, this helps people who suffer from lactose intolerance. Evidence suggests it can also help people with asthma, eczema and other allergies, potentially due to its high zinc content, and high levels of compounds such as nucleosides / nucleotides, which promote healthy cell growth and have an anti-inflammatory effect in the gut. Sheep milk is especially rich with these compounds, with levels nearly 100 times higher than cow milk.

“For those who are severely lactose intolerant, the lactose will have been converted into lactic acid by the time it becomes cheese, and if they take their sheep milk in the form of yogurt, much of the lactose goes out with the whey in hard cheese making”

The benefit of alkaline rich foods is said to lie in the body’s ability to absorb vitamins and nutrients and strengthen the immune system. Acid-rich foods are said to disrupt the body and the blood’s pH level, leading to mineral loss (like Calcium) and increase the susceptibility to illness.

We hope you’ve found this article useful and have been inspired to try sheep milk! 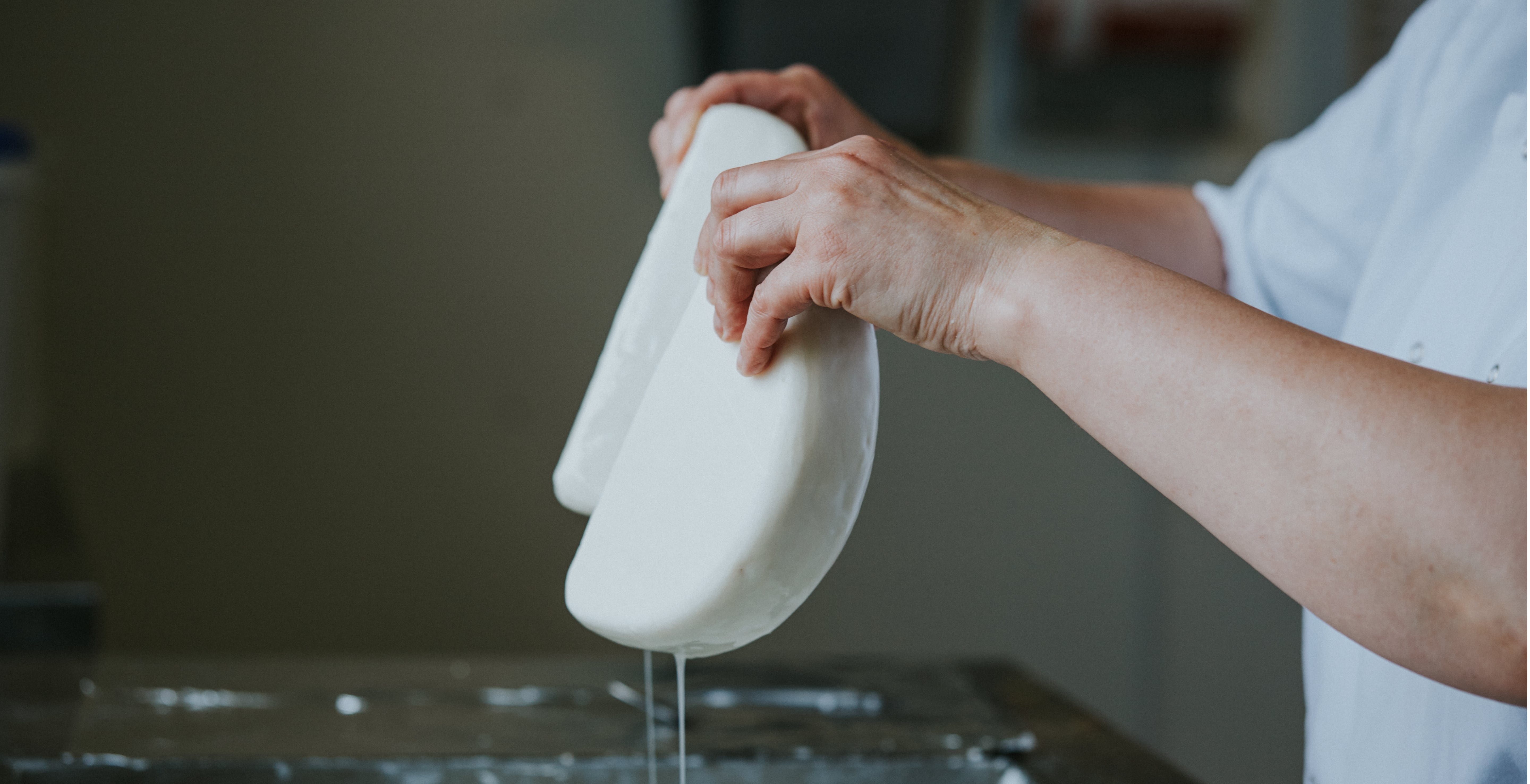 Image: Cheese being produced at our farm in North Yorkshire

Naturally, we are incredibly passionate about sheep milk and its potential, and want to continue doing our bit to raise awareness of this rich, creamy and nutritious super-food which works perfectly as part of a well-balanced diet. Consider introducing sheep milk and sheep milk products such as yogurt and cheese into your diet to reap the nutritional benefits, as well as improve digestive issues if you suspect or have been diagnosed with a cow’s milk intolerance. Not only is it good for you, but it’s also delicious.

In addition to sheep milk, we're passionate cows milk and water buffalo milk cheese producers, so we believe in their benefits too. However, sheep milk is worthy of promotion due to it’s little-known benefits, and more recently due to Coronavirus, our local sheep milk industry has been badly hit.

Due to the ongoing Coronavirus pandemic, the sheep milk industry is suffering disproportionately due to its reliance on the food service sector. You can learn more here, to find out how we're supporting our sheep dairy farmers and what you can also do to help.