There are many myths and legends about how humans discovered the joys of blue cheese, we'll share our favourite story here and then explain what makes blue cheese blue. 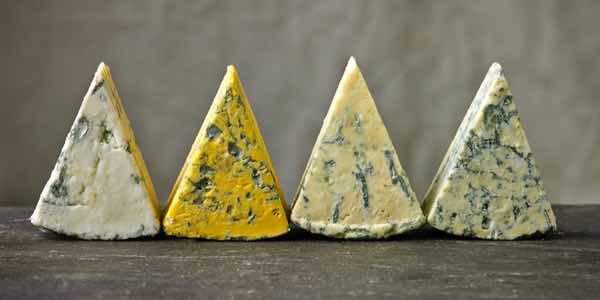 One of the most popular fables involves a shepherd boy tending his flock in the mountains. While sheltering in a cave to have lunch, he was disturbed and had to run off after his sheep – leaving his bread and cheese behind. When he returned a few days later, he discovered the cheese had turned blue.

The cool, damp atmosphere of a cave are perfect conditions for blue penicillium mould to thrive, as you know how quickly bread can go off even when kept warm and dry.

This, allegedly, is how the connection between penicillium fungi and blue cheese was made.

These days, thankfully, we don't have to climb mountains to make blue cheese – instead a Penicillium Roqueforte culture is added to the milk at the beginning of the process. The hypertonic solution of penicillium is very potent and only a very small amount is required for a large vat of milk. There are numerous varieties of penicillium, which produce blue cheeses of different strengths of flavour.

Once the cheese is made, the blue vening or blue mould develops when the penicillium roqueforte in the curd meets and reacts with oxygen. To create the right environment for the reaction to happen, we need to store the cheeses in specific conditions; slightly higher temperatures than the refrigerated store, and with higher humidity; a moist atmosphere is essential to encourage the blue mould to develop.

At periodic intervals during the maturation process the cheeses can be spiked with stainless steel needles to allow the blue veins to develop.  The spiking essentially allows oxygen to get into the body of the cheese, thus causing the reaction with the penicillium roqueforte and resulting in the beautiful and striking blue veins.

The timing of this spiking process can be critical to the unique development of the cheese too, for instance the continental soft blue cheeses are pierced within the first week, whereas as Stilton cheeses are usually pierced at around six weeks.

What effect does the mold have on the cheese? Well, as well the unique umami flavours, the mould processes the body of the cheese to deliver a deliciously creamy texture. My mouth is watering at the thought!

Do you have a favourite blue cheese, we'd love to here in the comments below x